In the FBI’s Uniform Crime Reporting (UCR) Program, law enforcement agencies can clear, or “close,” offenses in one of two ways:  by arrest or by exceptional means.  Although an agency may administratively close a case, that does not necessarily mean that the agency can clear the offense for UCR purposes.  To clear an offense within the UCR Program’s guidelines, the reporting agency must adhere to certain criteria, which are outlined in the following text.  (Note:  The UCR Program does not distinguish between offenses cleared by arrest and those cleared by exceptional means in collecting or publishing data via the traditional Summary Reporting System.)

In the UCR Program, a law enforcement agency reports that an offense is cleared by arrest, or solved for crime reporting purposes, when three specific conditions have been met.  The three conditions are that at least one person has been:

In its clearance calculations, the UCR Program counts the number of offenses that are cleared, not the number of persons arrested.  The arrest of one person may clear several crimes, and the arrest of many persons may clear only one offense.  In addition, some clearances that an agency records in a particular calendar year, such as 2011, may pertain to offenses that occurred in previous years.

In certain situations, elements beyond law enforcement’s control prevent the agency from arresting and formally charging the offender.  When this occurs, the agency can clear the offense exceptionally.  Law enforcement agencies must meet the following four conditions in order to clear an offense by exceptional means.  The agency must have:

Examples of exceptional clearances include, but are not limited to, the death of the offender (e.g., suicide or justifiably killed by police or citizen); the victim’s refusal to cooperate with the prosecution after the offender has been identified; or the denial of extradition because the offender committed a crime in another jurisdiction and is being prosecuted for that offense.  In the UCR Program, the recovery of property alone does not clear an offense.

When an offender under the age of 18 is cited to appear in juvenile court or before other juvenile authorities, the UCR Program considers the incident for which the juvenile is being held responsible to be cleared by arrest, even though a physical arrest may not have occurred.  When clearances involve both juvenile and adult offenders, those incidents are classified as clearances for crimes committed by adults.  Because the clearance percentages for crimes committed by juveniles include only those clearances in which no adults were involved, the figures in this publication should not be used to present a definitive picture of juvenile involvement in crime.

Expanded information regarding clearances for the offenses of forcible rape, robbery, aggravated assault, burglary, motor vehicle theft, and arson may be found in Table 27, “Percent of Offenses Cleared by Arrest or Exceptional Means, Additional Information About Selected Offenses by Population Group, 2011.” 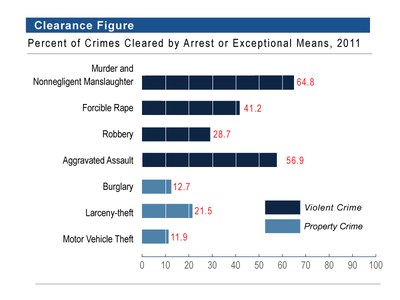 For questions about this information or for Web assistance, please contact the FBI’s Criminal Justice Information Services Division at (304) 625-4995. For more information about the UCR Master Files from which this publication was derived and other available UCR data, see UCR Electronic and Hard Copy Data Dissemination Standard Operating Procedures. To obtain UCR data not presented in this publication, please contact us via e-mail at cjis_comm@leo.gov.