The FBI’s Uniform Crime Reporting (UCR) Program collects cargo theft data to inform the law enforcement community, federal and state legislators, academia, and the public at large about this particular crime. The data can be used to create awareness and to measure the impact cargo theft has on the economy and potential threats to national security. Often, cargo theft offenses are part of larger criminal schemes and have been found to be components of organized crime rings, drug trafficking, and funding for terrorism. The UCR collection of cargo theft data is relatively new with only 6 years of data published, but the number of agencies reporting cargo theft incidents has increased each year. As more agencies participate, future versions of this cargo theft report will depict a more complete account of the occurrences of cargo theft in the United States.

Due to the significant economic impact cargo theft has on the United States economy, and the potential for use by terrorist organizations, Congress mandated H.R. 3199, the USA Patriot Improvement and Reauthorization Act of 2005 on March 9, 2006. It required the Attorney General to “take the steps necessary to ensure that reports of cargo theft collected by federal, state, and local officials are reflected as a separate category in the Uniform Crime Reporting System, or any successor system, by no later than December 31, 2006.” In response to this mandate, the Criminal Justice Information Services (CJIS) Advisory Policy Board approved a definition for collecting cargo theft in December 2006. Creation of the data specifications required to capture cargo theft data in the UCR’s Summary Reporting System as well as the National Incident-Based Reporting System were finalized in 2010 with the first publication of cargo theft data in 2013.

What is cargo theft?

Cargo theft is defined as “The criminal taking of any cargo including, but not limited to, goods, chattels, money, or baggage that constitutes, in whole or in part, a commercial shipment of freight moving in commerce, from any pipeline system, railroad car, motor truck, or other vehicle, or from any tank or storage facility, station house, platform, or depot, or from any vessel or wharf, or from any aircraft, air terminal, airport, aircraft terminal or air navigation facility, or from any intermodal container, intermodal chassis, trailer, container freight station, warehouse, freight distribution facility, or freight consolidation facility. For purposes of this definition, cargo shall be deemed as moving in commerce at all points between the point of origin and the final destination, regardless of any temporary stop while awaiting transshipment or otherwise.”

This definition does not serve as a legal description for prosecutorial purposes. Instead, it was developed to capture the essence of the national cargo theft problem in the United States. The legal elements of knowledge and intent were intentionally omitted.

Participation in the UCR Program is voluntary, and agencies or states may choose not to participate. Since the first publication of cargo theft data in 2013, the number of states and federal agencies participating has steadily increased each year. 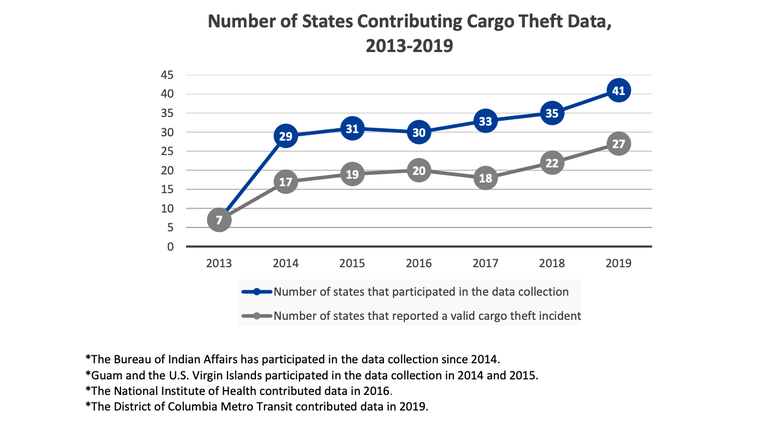 Quality data concerning cargo theft can help us better understand this crime and the threats associated with it. As more agencies choose to report their incidents, the FBI’s UCR Program will be able to provide more information about cargo theft on a national scale. For additional information on the UCR Program’s collection of cargo theft incidents, visit https://ucr.fbi.gov/ucr-program-data-collections.