Since 1996, editions of Crime in the United States have been available on the FBI’s Web site, www.fbi.gov. First released in Portable Document Format (PDF) files, more recent editions have been published as Hypertext Markup Language (HTML) files. The FBI’s Uniform Crime Reporting (UCR) Program staff are committed to improving their annual publications so that the data they collect can better meet the needs of law enforcement, criminologists, sociologists, legislators, municipal planners, the media, and other students of criminal justice who use the statistics for varied administrative, research, and planning purposes. For more information about how the UCR Program collects data, see About the Uniform Crime Reporting Program.

Crime in the United States, 2014, presents data tables containing information on the topics listed below. Data users can download Microsoft Excel spreadsheets of the data tables and Adobe PDFs of most of the text.

Provides additional data that the program collects on the eight offenses. Depending on the offense, these details may include the type of weapon and the type and value of items stolen. For the offense of murder, expanded homicide data include information about murder victims, offenders, and circumstances that are collected as supplemental homicide data.

Furnishes information about crimes “solved” either by arrest or exceptional means.

Provides the number of arrests made by law enforcement and the age, gender, and race of arrestees for the 28 offenses (see Offense Definitions) for which the UCR Program publishes arrest data.

The table below shows the number of law enforcement agencies contributing data to the UCR Program within each population group for 2014. Information published in Crime in the United States, 2014, reflects data from these agencies. 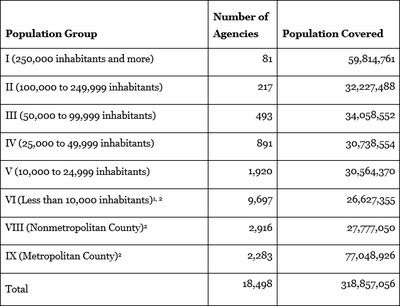 Currently, 33 states are certified to report data via the NIBRS. Among agencies within those states, more than 38 percent reported all of their statistics via the NIBRS. This represented 31 percent of the U.S. population covered by UCR participants and accounted for 28 percent of all crime reported to the UCR Program.

What do you think?

The E-Government Act of 2002 (E-Gov), enacted by Congress, promotes more efficient uses of information technology by the federal government. This Web publication is a result of the UCR Program’s response to that Act. We welcome your feedback via our short evaluation form. Your comments will help us improve the presentation of future releases of Crime in the United States.

What you won't find in this publication

Rankings by crime levels - Any comparisons of crime among different locales should take into consideration numerous other factors besides the areas’ crime statistics. Therefore, the UCR Program does not provide rankings of localities by crime levels. Caution Against Ranking provides more details concerning the proper use of UCR statistics.

Information about unreported crime - Crime in the United States features data collected from law enforcement agencies regarding only those offenses known to police. However, the Bureau of Justice Statistics (BJS), another agency within the Department of Justice, administers the National Crime Victimization Survey (NCVS). Using data from the NCVS, the BJS publishes information regarding crimes not reported to the police. For more information about the NCVS and how its data differ from information presented in Crime in the United States, see The Nation’s Two Crime Measures.

County crime totals and “raw” data - Crime in the United States offers crime data from local and county law enforcement agencies in separate tables. These data, which are also presented individually within a county (Crime by County), and other 2014 “raw data” from the UCR Program’s master files will be available sometime after the release of the 2014 publication. For more information, contact the FBI’s Criminal Justice Information Services Division via e-mail at crimestatsinfo@ic.fbi.gov.

Special studies - In previous years, Crime in the United States included special studies analyzing UCR data. Such studies are now released separately from the publication as monographs on www.fbi.gov.

The following is a suggested citation style for data users who need to reference information from this report:

What do you think?